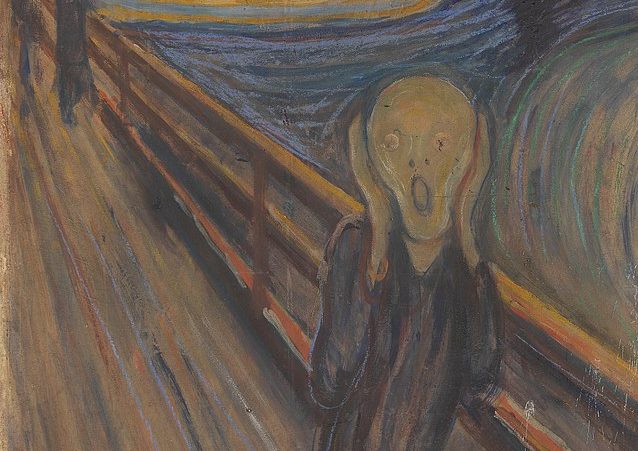 You know those suspense stories where a character is scared of the wrong thing? Like when a cop is tracking a serial killer, and she’s pretty sure it’s the creepy taxi driver, but it ends up being her own hot, nice, totally normal-seeming boyfriend?

This happens a lot in research communication.

As scientists, we’re trained to be comprehensive and detail-oriented. And there are some traditional scientific communication formats where this makes sense. Peer-reviewed journal article? Sure, include those 78 references. Thesis or dissertation? Yes, show your committee that you’ve thought through every nuance and caveat. However, the conventions of scientific writing can be a liability for other forms of communication.

Many scientists I work with have some level of trepidation about leaving out details. They get uncomfortable when I suggest leaving references off their PowerPoint slides. They reflexively report percentages to one or two decimal places in fact sheets. They’re nervous about not having statistical coefficients and p-values somewhere in their infographic. In short, the most common fear I see is that a nebulous someone will be unhappy that something is missing. And when this happens, I want to grab an author by the lapels and scream, “THE CALL IS COMING FROM INSIDE THE HOUSE!!”

So, what’s the hot, nice, totally normal-seeming boyfriend in this scenario? What should scientists really be scared of in their communication? I would argue that, once you get over the basic (and critical) threshold of presenting information in an accurate and ethical way, scientists should be most concerned about securing attention, conveying a clear message, and issuing a call to action.

If no one picks up your wall-of-text handout, or if they glaze over your during your dozen-bullet slides, then trust me…they’re not going to notice your references or p-values or anything else. And if no one understands or acts on your research…well, apart from scientific misconduct, I can’t think of a more tragic outcome for your work.

And, really, what’s the worst that could happen if someone doesn’t see a detail that they really care about? They stand up during your presentation and decry your incompetence? (I, for one, have never seen that happen…and, if it did, there’s a good chance that everyone else in the audience would think the decrier was a little unhinged.) Best case scenario? The person tracks you down, asks you for more details, and it’s the meet-cute for a lovely and long-term collaborative relationship. Your story doesn’t have to be a thriller…it can be a buddy comedy!

What is you biggest fear about research communication? How can Data Soapbox help? Contact us here.

Keep It or Cut It?
Thoughts on Simplification

In this blog post, I talked about researchers' fear of leaving information out of their…

Research Communication When You Need to “Use It or Lose It”

Managing research budgets is tricky. Sometimes you spend too much at the beginning of a…

You Asked, We Answered: When to Use Visuals in Research Communication

I recently gave a presentation on the use of visuals in research communication. During the…