Professional areas like science and law are dominated by written and spoken communication. For scientists, peer-reviewed journal articles and scientific conference presentations are the flagship communication formats. And then legal professionals spend much of their time reading and writing legal documents, and legal arguments and testimony are largely spoken.

Our recent blog post on data visualization in the courtroom gave me the chance to make some unexpected (and wonderful) connections in the legal field.* This led to several conversations about value: Why should an individual, company, or government office pay to produce visuals? Are they just flashy nice-to-haves, or can they serve a meaningful role in the pursuit of justice?

Data Soapbox is driven by the understanding that effective visual communication of data can have meaningful, positive human impact. As such, we believe that legal visualizations can bring real value to civil and criminal trial attorneys.

This week, I’m doing a deeper dive into the science of visual aids. Given that this blog post was inspired by the legal field, a lot of my examples come from that area. I’ve also brought in examples from other fields when they’re helpful.

According to the North Carolina Judicial Branch, most jurors serve one to two days, although some can serve for several weeks. Even at the shorter end of that range, jurors hear hours’ worth of information. It’s important for jurors to remember and consider all evidence when making their verdict, even if some of it was presented in the opening minutes of a multi-hour trial.

In law, the most commonly cited study of visuals and memory is from 1963, in a book by Harold Weiss and J. B. McGrath. The researchers presented content from a government report in spoken form, visual form, and a combination of the two. They found that people remembered the most material when it was presented both orally and visually. 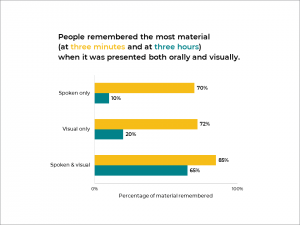 There’s a small study showing that artistic graphs are particularly memorable. Bateman and colleagues conducted a study of plain versus “embellished” graphs, like this one from designer Nigel Holmes.** They found that study participants (20 university students) understood the plain and artistic graphs equally well, and they remembered them equally well after five minutes. However, after 2-3 weeks, participants had better memory of the artistic graphs.

Much of the research on visuals and learning has focused on children and reading comprehension. In a popular review of research studies, Howard Levie and Richard Lentz found that students better remembered and understood written information when it was illustrated. (They also described several studies showing that students better remembered facts from a passage read aloud if it was illustrated.) However, learners can skip over complex illustrations, like intricate diagrams. This suggests that it’s important to make visuals simple, streamlined, and focused.

Specific to the legal field, Neil Brewer and colleagues conducted a study of how well people (specifically, law students and “regular people”) understood jury instructions about self-defense. They offered the instructions in three formats: audio only, audio only with extra explanation and examples, and audio paired with computer animation and a flow chart. In the two audio-only scenarios, law students understood self-defense better than regular people did. But, when visuals were used, regular people had the same level of understanding as law students. 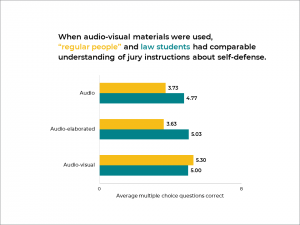 Visual aids are one way to demonstrate that a scientific technique can be used in a trial. In 1990, the prosecution in State v. Pennington used DNA analysis (a hot new forensic technique at the time) in a trial for rape and assault. This case helped establish that “the use of visual aids for the jury so that the jury is not asked to sacrifice its independence by accepting the scientific hypotheses on faith” is one way to show that a scientific procedure, like DNA analysis, is reliable.

In a pair of research studies, Jaihyun Park and Neal Feigenson recruited college students to serve as mock jurors in a racial discrimination lawsuit. Students watched a video of attorneys’ opening statements with and without accompanying PowerPoint slides. Students tended to make judgements in favor of the party, plaintiff or defendant, that used PowerPoint. This finding seemed to be explained by jurors better remembering the slide-wielding party’s statistical evidence and perceiving their attorney to be more prepared, competent, and credible. 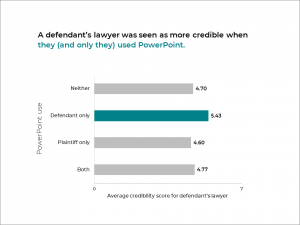 Visuals can (possibly) save time.

The human brain can process complex images in a fraction of a second (as demonstrated by studies like this one). Obviously, that’s a lot faster than someone can describe an image verbally or read a description in text.

I wasn’t able to find any research studies that directly tested whether it takes less time to learn a concept if a written or oral description is accompanied by visuals. (Let me know if you know of a study like this!) But, assuming that rapid visual processing speeds correspond with rapid understanding, using visuals in the courtroom might help cases proceed more quickly, leading to time and cost savings for litigants, defendants, and the government.

Are you ready to use visual aids in your legal cases? Data Soapbox can help! Contact us here.

* Extra thanks to attorney Sarah Olson for suggesting this blog topic as well as reading and providing feedback on an earlier draft of this post.

** One of my favorite data artists is Mona Chalabi. When I think of voter suppression, I immediately picture her graph of voter wait times.

Data Visualization in the Courtroom

Edward Tufte pulled me onto the effective data communication bandwagon circa 2007, in one of…