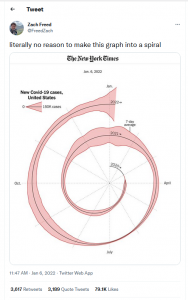 Supporters of the NYT Spiral generally said things along the lines of “It’s interesting/different/attention-grabbing/debate-inspiring!” They also argued that it was irrelevant if dataviz geeks hated the graphic because the graphic wasn’t meant for them; it was meant for “the general public.”*

I asked members of the “general public” (n = 2) what they thought of the NYT Spiral:

So, why the disconnect? Why did so many dataviz experts like (or at least, not have a major problem with) a graphic that my sample didn’t like or understand?

In my dataviz workshops, I talk about the distinction between art and graphic design.

Art is about exploration and self-expression for the artist and about getting an emotional reaction from the audience. It doesn’t matter if different audience members have different understandings of, or reactions to, a piece of art…in fact, that tension and debate is often a good thing. (Note that dataviz can be art.)

Does the New York Times publish art? Sure, in bits. Each article is typically accompanied by photos or illustrations.

Is the NYT Spiral good art? Maybe, in the sense that it’s experimental and provokes some discussion. But, as my sister eloquently expressed, it’s not really something you’d want to frame and hang on your office wall, and I’m not sure that it got much attention or reaction outside of the dataviz community.**

Graphic design, on the other hand, must achieve some sort of functional purpose…getting people to buy a product, attend an event, wash their hands, something like that. It’s bad news if you don’t understand whether an ad is for a sports bar or Keno,*** or if you can’t tell what time a concert starts, or if you’re not sure whether to wash your hands for 3 seconds or 30.

Does the NYT Spiral forward the New York Times’s purpose of promoting understanding? Not particularly well. I can see that cases were really low in early 2020 and in June 2021, and that cases are on the uptick. But, that’s a small amount of vague information for how much real estate this chart takes up.

I tried redoing the graph as a radial to increase precision, allow for year-to-year comparisons, and tone down the “intestinal” feel: 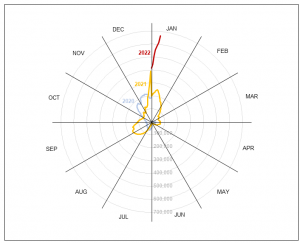 Eh, still not great. This still takes a lot of mental gymnastics to understand and interpret. 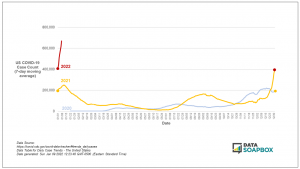 This graph is definitely too run-of-the-mill to be considered artistic but, when it comes to fostering understanding, I think it beats the original.

What do you think about the NYT Spiral? Comment below!

*For the purpose of this post, let’s suspend disbelief about NYT subscribers being a representative cross-section of the general public.

**There are also way prettier spirals out there. The NYT spiral has inspired some funny art, though.

***This is an actual example from our house. This Keno ad runs during Wheel of Fortune and, at least twice now, my six-year old has asked which restaurant the commercial is for.